Be the first to review this product
€39.00
In stock
SKU
520
Add to Wish List
Organic Black Seed Oil Nigella Sativa For over two thousand years the black seed (Nigella sativa), a plant from the Ranunculaceae (buttercup) family, has been traditionally used by various cultures throughout the world as a food and in health and general wellbeing. The ancient Egyptians knew and used the black seed. Tutankamun is even believed to have had a bottle of black seed oil in his tomb – and that would have been organic of course! Nigella sativa originates from Western Asia and is a herb that grows about 16-24 inches in height and has white flowers when in bloom. The plant is now cultivated from the Near East to India, though the most highly regarded black seed oil comes from Egypt. Organic Black Seed Oil from Viridian Nutrition is of the highest quality, made exclusively from organic Egyptian black seed, cold-pressed and bottled in amber glass bottles under a blanket of nitrogen to protect the oil from air and light. Organic Black Seed Oil from Viridian Nutrition is certified organic by the Soil Association. Organic growing is better for the planet, better for you. Organic standards ensure that the black cumin seeds in our Black Seed Oil are grown without the use of synthetic pesticides of other chemical sprays. Organic growing works with the planet instead of against it. The organic farms for our black seeds are all in Egypt ensuring the highest quality. Nigella sativa is an exotic addition to Viridian's extensive essential fatty acid range. Also known as the Blessed Seed, black seed is popular in the Middle and Far East. With a pleasant aroma and taste, it can be taken internally off the spoon, used as part of a salad dressing or used as a head or chest rub. Viridian’s Organic Black Seed oil is vegan, organic and certified Kosher, guaranteeing the highest quality black seed oil available. Organic Black Seed Oil is part of the 200+ award-winning range of nutritional supplements and beauty products from Viridian Nutrition.
Skip to the end of the images gallery 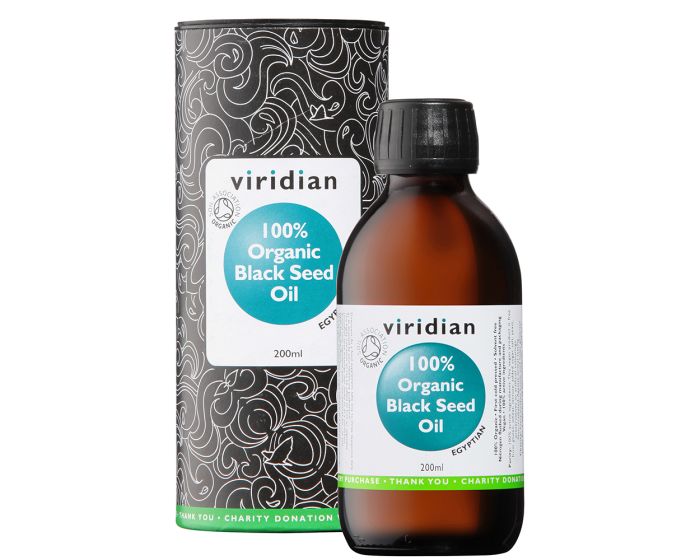 Details
Directions: As a food supplement, take one teaspoon daily or as directed by your healthcare professional. This highly nutritious oil can be added to fruit or vegetable smoothies, salad dressings, dips, soups or as a condiment drizzled onto vegetables, pasta, rice, potatoes etc... or just taken from the spoon. This pungent oil can also be used topically as a traditional massage oil and as an aromatic chest rub. Each 5ml teaspoon provides approx: Ingredient Weight %EC NRV Organic black seed oil extracted from Nigella sativa 100% Providing: Linoleic acid (Omega 6) 2450mg Oleic acid (Omega 9) 1040mg Black seed is also known as Black Cumin, the Blessed and by its botanical name Nigella sativa. It is a rich source of Omega 6 and Omega 9 essential fatty acids. Country of Origin, Egypt. Contains a broad range of important phytochemicals including the potent antioxidant thymoquinone and beta sitosterol. Take daily alongside Viridian's MultiPhytonutrient Complex for optimum nutrition.
Reviews
Write Your Own Review
Delivery and Returns